A labyrinth of islands and grottos to explore in the bay of wonders. 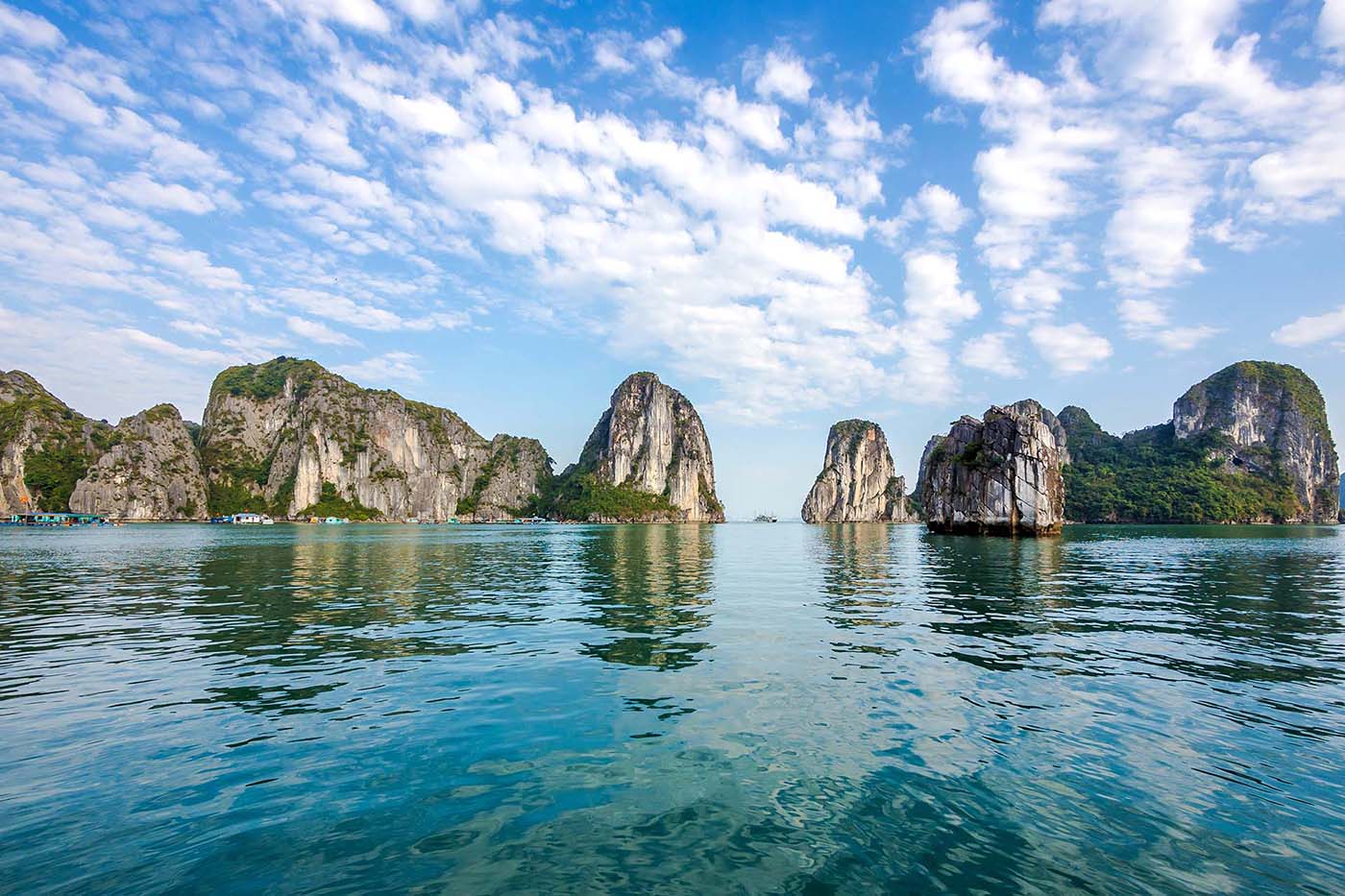 Among the 1,969 sunken limestone towers submerged in the emerald waters of Halong Bay are a series of ancient caves and grottoes – many of which remain unexplored. To date, there are 59 caves listed on the official registry (this includes the most recent discovery of 23 ‘new’ caves), all of which have special belonging in Halong Bay’s distinctive ecosystem.

Undoubtedly, the most famous of them all is Sung Sot Cave, which has rightfully earned its near-legendary status among visitors to the world-famous bay. We’ll reveal 7 famous and magnificent Halong Bay caves, lagoons, and grottoes that are worth exploring at least once in Vietnam, some of which are on our Lux Cruises itineraries. 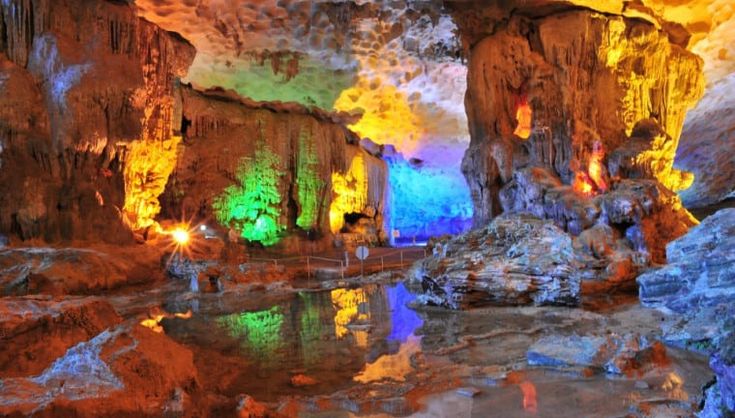 Discovered by French explorers in 1901, located in Bo Hon Island, Sung Sot cave is the largest and one of the most beautiful caves in Halong Bay. It is where you can find many rocky islands concentrated in different strange and distinct shapes.

The first thing you may think when setting foot in the cave is that it is just a very small area. However, you will be surprised after passing through the rocky slot and going inside. The area is huge, stretching about 10.0000 square meters. You will be surprised by its majestic beauty and the huge expansion. Maybe that’s the reason why it is called “Sung Sot Cave” or “Surprising Cave”. 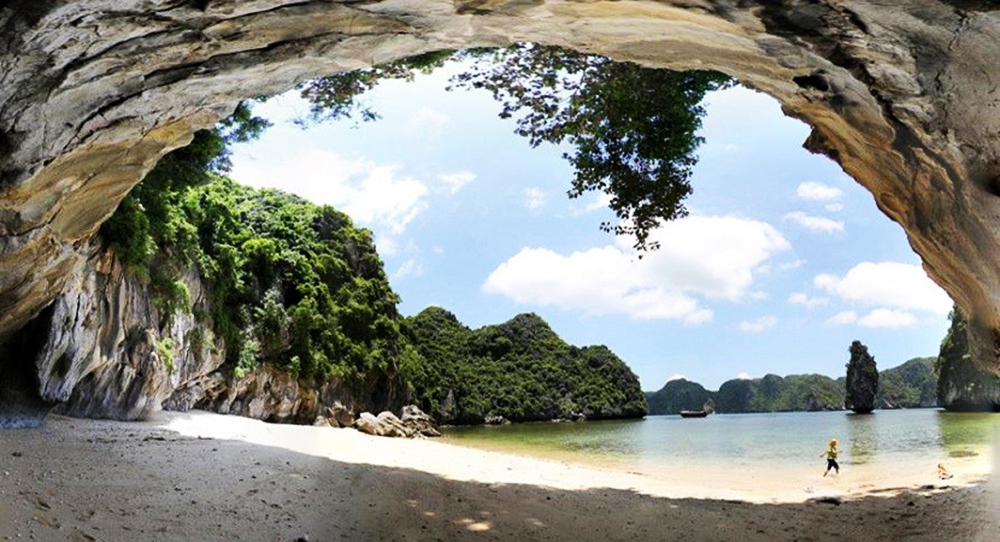 Located just 4 km from the harbor, Thien Cung is the most interesting and legend-filled cave. It is considered as a unique winding pathway through the “Heavenly Palace”.

About 27 meters above sea level, visitors must climb 90 rocky steps to the mouth of the cave. The grotto is well-known for its complex interior structure, high ceilings, and multi doors. There are three large chambers in the cave, each containing imposing displays of active stalactites and stalagmites. They have various sizes and strange shapes such as fish, birds, and celestial maidens.

Thien Cung cave is also famous for its legend about an ancient Dragon King. He defeated invaders and returned to his cave instead of gaining veneration. The Dragon Prince married a girl named May. Their wedding was held in the cave attended by many dragons, giant eagles, and huge pythons. Going around the cave, you can see this scene engraved on the wall in stone. Let your imagination fly. 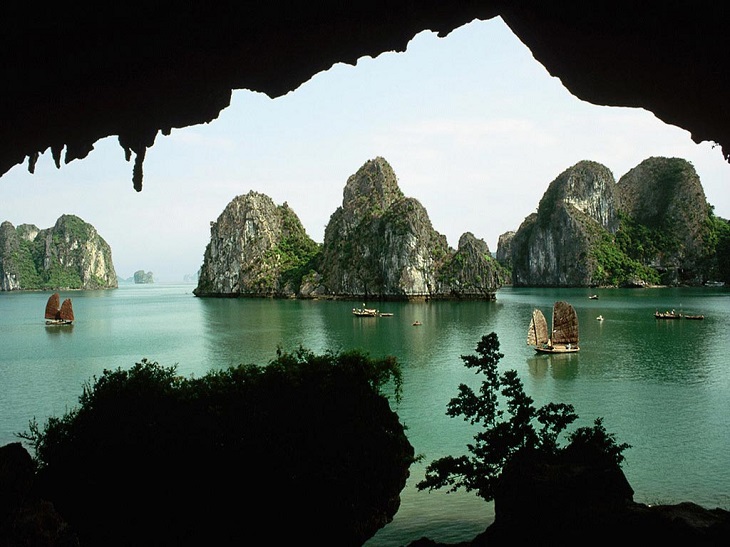 Trinh Nu grotto is situated on the island range of Bo Hon and just about 15 km from Bai Chay Beach. While it is home to some fishermen, it is considered the symbol of true love and a romantic place for walking the path of love for young couples.

Legend has it that there was once a beautiful fisherman’s daughter. Her family was so poor that it was in service of the fishing zone’s rich administrator. The administrator forced the family to give him the girl as a concubine. However, the daughter refused as she already had a lover. Angered by her refusal, he exiled her to a wild island where she had to suffer from hunger and exhaustion waiting for her lover in vain till death and then turning to stone. Nowadays, when visiting the cave, you still can see the statue of a lying girl with long hair, and eyes looking towards the mainland.

Trinh Nu Grotto consists of three chambers: one is like a house with a flat roof, another is 8 meters long and 5 meters wide, and the third is linked by a narrow window. Inside the grotto, there are many stalagmites and stalactites in many different forms creating beautifully carved pictures on the walls. 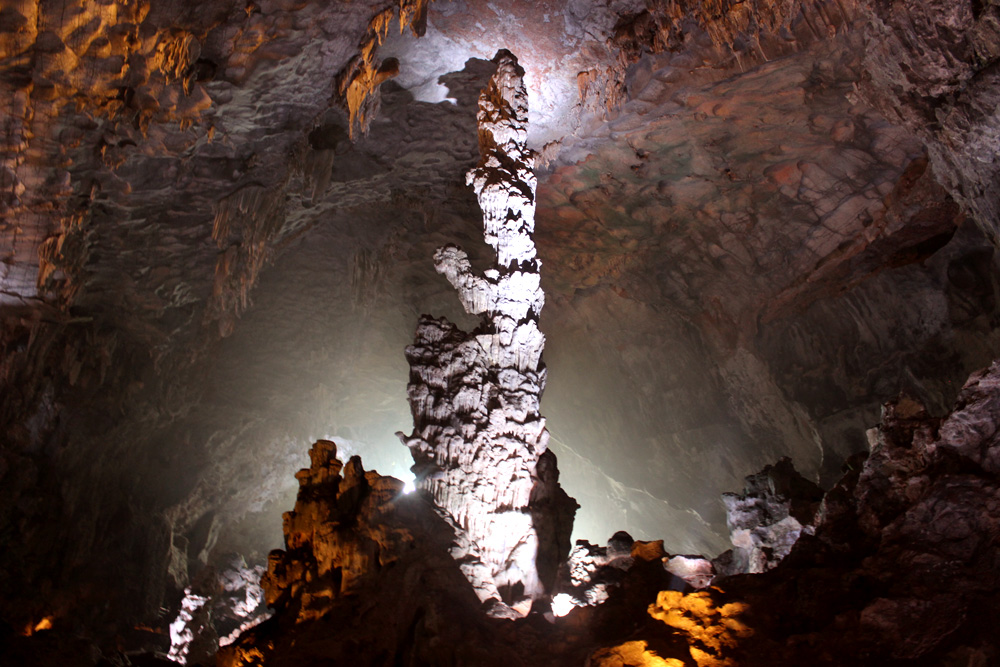 Dau Go Cave (Hang Đầu Gỗ) is one of the most famous caves in Halong Bay due to its volume and sheer size. The French tourists who first explored the cave called it “Grotte des Merveilles” which means “Cave of Wonders”. And the cave is such a beauty that you’ll have to go and see it for yourself.

There are many explanations for the name of the cave. The most popular theory is that a long time ago, some fishermen gathered in front of Dau Go Cave to repair their boats. After that, there were many blocks of wood left. The name Dau Go (Wooden Stakes), hence, was formed from this incident. Legend says that they’re wooden stakes from the battle on Bach Dang River.

Dau Go Cave brings tourists feelings of the ancient, pristine, and extremely quiet beauty thanks to many stone pillars and stalagmites. It is also more unique than other caves with its rich flora and fauna system. Its structure is divided into 3 chambers. The first one has many stalactites of all colors with images of lions, turtles, and pythons,… Coming to the second one, you will see the image of rocky islands. And the last one has the image of giant stone pillars.

Me Cung Cave (Hang Mê Cung) is one of the most attractive sites in Halong Bay due to its outstanding historical, cultural, and natural value.

The cave looks like a vivid “museum” storing many archaeological artifacts. For those who are keen on history, you may know the information about the pre-Halong culture around 7000 to 10000 years ago. When exploring the cave, you will have a chance to see and even touch fossilized freshwater animal bones that remain on the walls of the cave. Also, you will have a chance to understand more about the homes and living methods of the prehistoric people.

Stepping onto the tropical islands with lush green forests, you can explore the cave inside the mountain and you must pass over the stone steps. The highlight of Me Cung Cave is the big stone columns formed by the development of stalactites and stalagmites over the course of thousands of years. In the cave, there is also a system of spiral sparkling stones which make you feel like you’re entering the palace of an ancient king. 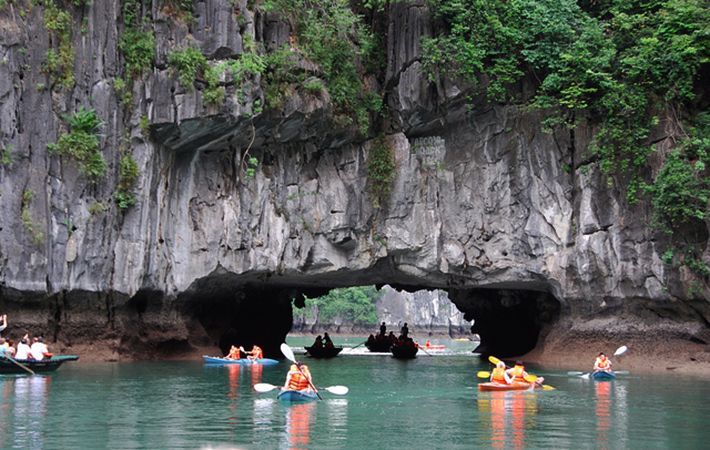 Located 14 km to the south of Tuan Chau beach and only 1 km from Sung Sot Cave, Luon Cave is a good destination for Halong Bay’s wandering tour, where you kayak through the eroded limestone cave.

In front of the cave, you can find Turtle Island and the Heavenly Gates where you get a chance to admire steep seas and clear water. Crossing Turtle Island, the blue waters become calmer and more peaceful. It’s where Luon Cave is. It looks like a circular iron bow with a blue lake in the middle. The lake is encompassed by craggy cliffs, charming orchids in bloom, the shade of ancient trees, and luxuriant vegetation. Under the calm blue water is the colorful life of different marine species like shrimp, crabs, and squid,…

Luon Cave attracts travelers mostly thanks to its wonderful and astonishing stalactites. When setting foot here, you may feel lost in the paradise of sparkling and eye-catching stalactites. However, the cruise ships are not allowed to enter the cave, but only anchor close to the gate. So, you can discover the cave on a bamboo boat or kayak. In your journey of researching Luon Cave, the most appealing impression to tourists would be natural scenery and quietness. It’s a wonderful combination of water, colors, plants, contours, and paradise on earth. Tien Ong Cave (so-called Grotte du Vieux by the French) covers an area of almost 1000 square meters. A tall rustic stone pillar divides the cave into 2 chambers. It boasts a system of thousand-year-old stalactites and stalagmites and a cradle of ancient Vietnamese people.

Though most Halong Bay caves have a narrow entrance and a large interior, this cave is totally different. It is exceptional with a big entrance (50m wide, 14m high) leading to a massive area inside (about 1000 square meters). Going inside, you can admire a block of stalactites, which looks like an old man with a gentle face, long hair, and beard. The local people call him a miraculous “fairy godfather”.

Apart from the purely natural beauty, the cave also has the remnants of prehistoric life such as mountain snails, freshwater snails, or rough stone and bone tools. Many archaeologists explain that ancient residents chose the cave as a shelter because it faces to the southeastern direction and helps them to avoid cold wind. So, the cave is a good destination to both enjoy your time and learn about history, culture, and geological tectonics.

The USA website, jusluxe.com Named Royal Suite as Sexiest Suite in Vietnam’s First All-Suites Cruise in the Gulf of Tonkin

A labyrinth of islands and grottos to explore in the bay of wonders.