Located on a beautiful hill, Bao Dai Villa was the emperor’s royal residence on Do Son Beach near Hai Phong in Tonkin Bay. Do Son is just a few hours by boat from famous Halong Bay. Emperor Bao Dai used to stay here for vacations and to relax with his family between 1933 and 1954, when he was Emperor of Annam and Chief of the Vietnam State.

The Do Son Suite is located on the main deck of the vessel and is 37.6 square metres in size. Every suite is designed individually with the character reflecting the history of the original royal villas. The interior design is inspired by the 1930s and the isolated former royal summer residence overlooking Do Son Beach, which was the most popular beach destination in Northern Vietnam. 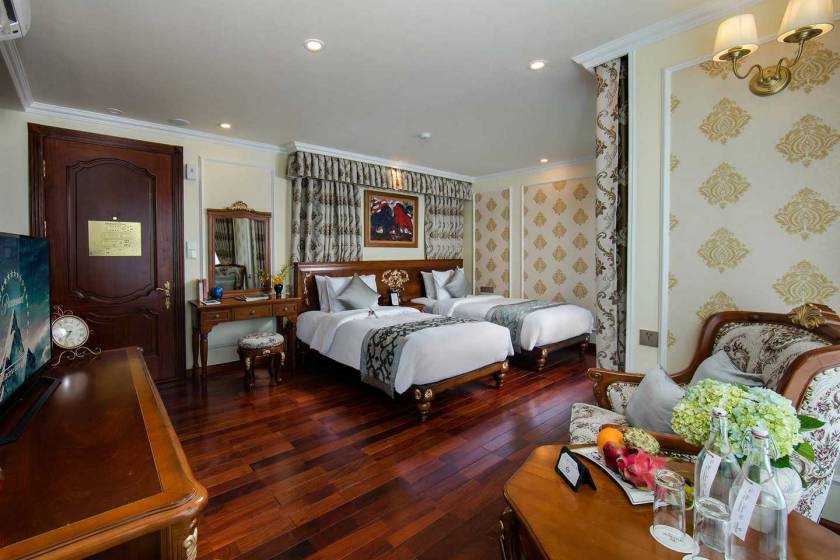 The Do Son Suite has twin beds and is adjacent to the Vung Tau Suite complete with its own private sun deck. This is just perfect for families. The suite also features typical Indochine décor, old black-and-white photos, wooden flooring, stylish tiles and a marble bathroom. Air-conditioning, a mini-bar and smart TV are included.

The Do Son Suite is spacious with its own private balcony affording spectacular ocean views. The old-fashioned bathroom is tastefully designed, gold in color and fit for royalty with a tub or walk-in shower. The ocean can be viewed from any corner of the bathroom.

Emperor Bao Dai was passionate about hunting. If the emperor had any free time, he and his servants always went off hunting. When the emperor was in his palace in Nha Trang, if he wanted to go to Me Van forest in Dak Lak or visit Bao Loc to go hunting, the emperor often drove himself. He even ordered a villa to be built by Lak Lake.

Inspired and named after the original Bao Dai Villa in Lak Lake, which overlooks the lake and is surrounded by the lush jungle of the Central Highlands, the Lak Lake Suite is located on the main deck of the vessel.

The Lak Lake Suite is the same size as the Do Son Suite, at 37.6 square metres, and both are actually the smallest suites on Emperor Cruises. The interior design is inspired by the 1930s and the isolated former royal residence overlooking Lak Lake. 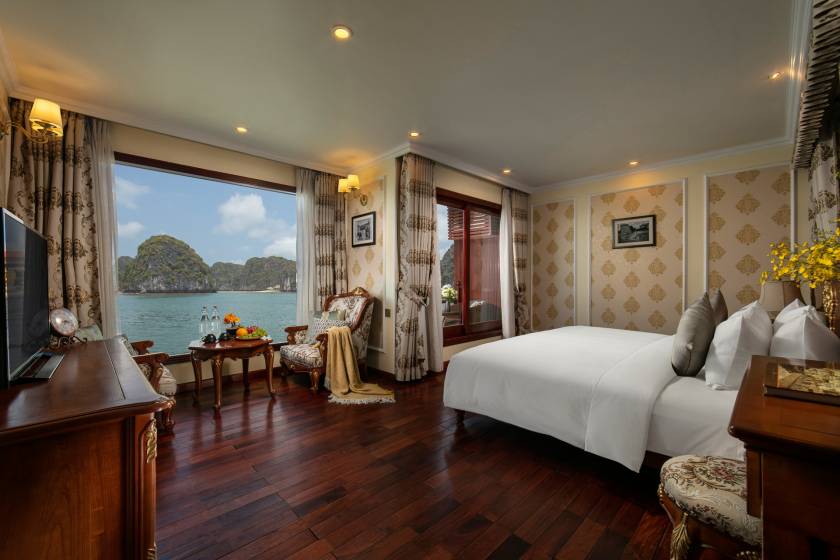 The Lak Lake Suite has twin beds and is adjacent to the imperial Hue Suite complete with its own private sun deck. This is just perfect for families. The suite also features typical Indochine décor, wooden flooring, stylish tiles and marble bathroom. Air-conditioning, a mini-bar and smart TV are included.

The Lak Lake Suite is spacious with its own private balcony affording spectacular ocean views. The bathroom is tastefully designed and fit for royalty with a tub or walk-in shower and the ocean can be viewed from any corner of the bathroom.

Named after the Hanoi Capital after his royal addication, The Viet Minh asked Bao Dai to resign and offered him an advisory role as “Citizen Prince Nguyen Vinh Thuy. Ho Chi Minh then took the presidency, and Bao Dai moved from Hue to Hanoi to work as his special advisor.

During this tumultuous point in history, he became enchanted by the patriotism of Ho Chi Minh, and in 1945, he accepted the unification of its three regions to create a future of freedom, independence, and happiness for the Vietnamese people. 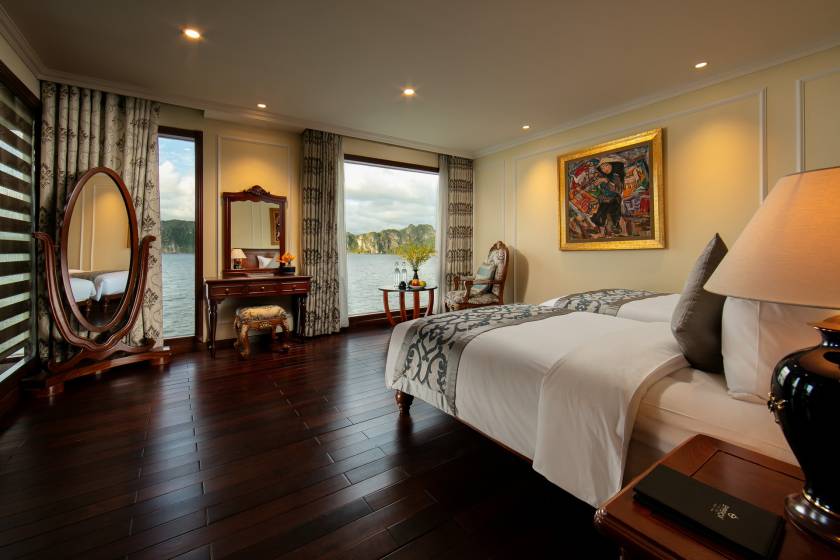 Toward the end of 1945, citizen Vinh Thuy fell in love with a northern girl, Mong Diep, breaking a promise of betrothal to Nam Phuong. He lived with Mong Diep in a French villa near the Red River. They lived here for two 2 years (1945-1946). The remaining villa in Hanoi is now located at 51 Tran Hung Dao Street, Hanoi, near French Embassy.

Bao Dai was known as a ‘ladies’ man,’ very handsome and suave, and deeply attractive to many beautiful women who could not resist his romantic charms. Bao Dai particularly enjoyed frequenting discotheques, night clubs, and bars during his loneliness time in Hanoi. 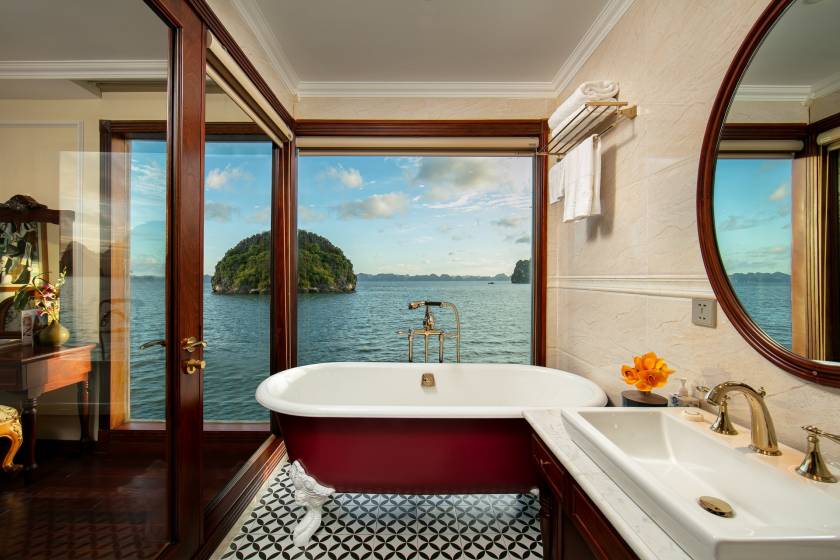 Sophisticated in design, the nostalgia of old Hanoi is recreated from the time when Bao Dai was the advisor to President Ho Chi Minh. While there, he fell in love with Mong Diep, a 21-year-old highly acclaimed beauty, and dancer in Hanoi, who originated from the northern province of Bac Ninh.

When he was emperor, he would splash out on a beautiful villa for his lover, but when he hit hard times at the end of his life in Hanoi or France later, he lived on the generosity of his little Tonkinoise, the lover Mong Diep. There are still many untold stories to regale about Bao Dai, and every suite tells a small part of his life.

Finding that the Viet Minh accorded him no role, and distrustful of the French, Bao Dai fled to Hong Kong in 1946. There he led a largely frivolous life, making appeals against French rule. In 1949 the French accepted the principle of an independent Vietnam but retained control of its defense and finance. 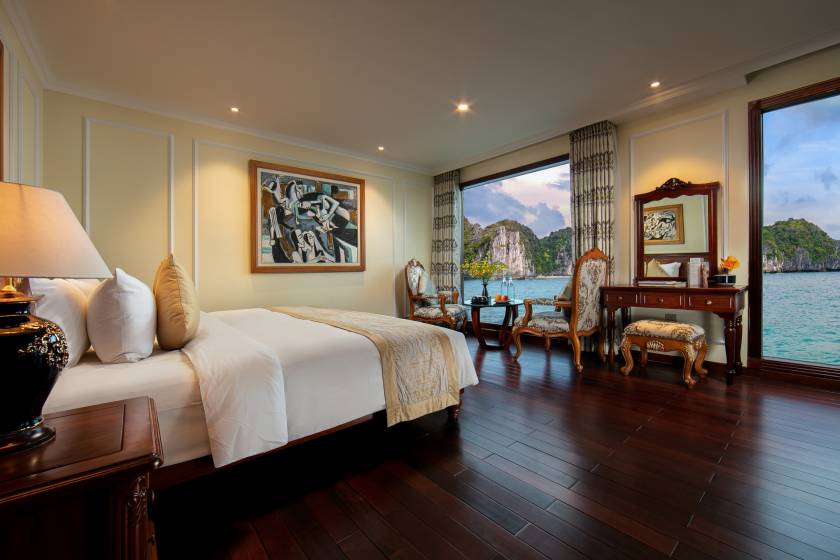 Bao Dai agreed to return to Vietnam in these circumstances in May 1949, and in July he became temporary premier of a tenuously unified and nominally independent Vietnam. He left the affairs of state to his various pro-French Vietnamese appointees, until October 1955 when a national referendum called for the country to become a republic. Bao Dai retired and returned to France to live until his dead in 1997.

Saigon was then renamed Ho Chi Minh City in 1976, as an honor to President Ho Chi Minh, after the victory of the Northern Army over Saigon on 30 April 1975. Saigon Suite and the near by Saigon Saigon bar help you to understand our history during this chaotic period, but is now a nice and peaceful place to relax with friends and learn more about Vietnamese history.

Knowing that guests sometimes prefer to dine in the comfort of their suites, we offer room service around the clock. Room service offers a delectable choice of appetizers, main courses and desserts along with breads, sandwiches, burgers, soups and salad 24 hours a day.

Excellent cuisine is one of our core values on board.

Menus change daily and a multitude of dishes are offered during the cruise program.

Guests are free to dine whenever, wherever and with whomever they choose.

Our staff have been highly trained to attend to guests’ every need and desire and they take great pride in providing a personal service that really sets them apart.

Their goal is to provide exemplary personal service day and night, ensuring that guests’ wishes are satisfied completely.

Butler service is included. It is the ultimate prerequisite for individualized attention. Highly trained and profoundly committed to fulfilling guests wishes, butlers are the ultimate indulgence, usually reserved for the privileged few.

Experience the Do Son Suite – Emperor Cruise through 360-degree photo